Links-O-Rama
Here are a bunch of links I haven't had time to publish but I feel like clearing out my favorites box so here they are:
* Howie Carr at the Ford Hall Forum? Yup, it actually happened: ["Fish out of water"].
* Is Robert Novak Schizophrenic? May: ["No Romney in 2008?"] June: ["Make no mistake, Mitt’s run has begun, but can a Mormon be elected President?"].
* Ralph Nader makes another great point: ["Hemp for Victory"].
* Billy Graham, a Hillary fan? Read the fine print and say, Oh no!: ["Clinton Honors Graham at Final Revival"].
* Christians: "Free" trade hurts the poor: ["The Cost of 'Free Trade' To Africa's Poor: $272 Billion "]
* China wants oil ... and they are willing to pay billions to control it: ["Chinese Oil Company Offers $18.5 Billion for Unocal"].
* Is it time to Freecycle? You be the judge: ["Freecycle"].
* Live 8 Concerts on TV: ["MTV, VHI to Show Much of Live 8 Concert"].
* Dems reveal Ohio problems: ["Democrats find 2004 voting problems in Ohio"]. Here is the full report: [http://www.democrats.org/vri/ohioreport/]. But, maybe these voting machine problems aren't really the problem, as noted here: ["Why the Democrats Will Keep Losing"].
* No surprise: Wisconsin Dems want Feingold to run in 2008: ["Favorite Son Feingold Wins Pres. Preference"]. Feingold has a new fund too: ["Progressive Patriots Fund"]
* Changing our money ... to make it stand for Liberty: ["The Liberty Dollar Bill"].
* Drip, drip, drip ... ["Last Days"].
* MyDD: The pleasant Daily Kos alternative: [MyDD.com].
* Zeese interviews Frank: ["What the Left Must Learn from 2004"]. BTW, Joshua Frank's new book, "Left Out: How Liberals Helped Reelect George W. Bush," is a must read.
* Former Bush Administration official calls the collapse of the World Trade Towers "bogus" and suggests it was a controlled demolition: ["UPI Hears..."]. The entire column written by Morgan Reynolds is here: ["Why Did the Trade Center Skyscrapers Collapse?"].
* Boston Herald whacks veteran reporters, staff: ["Amid cuts, Herald loses newsroom veterans"]. As a former "made member of the Purcell clan" - via CNC, this is so sad to watch. The Herald used to be such a hot paper and now it is just a filthy tab. It is so, so sad.
* Dems want Dean to go off: ["Democratic leaders back Dean, don't want 'wimp'"].
* Greens continue to lose credibility: ["Santa Monica City Council member leaves party"].
* But here is another Green that is intriguing: ["Elect Gloria"].
Posted by Tony at 6/26/2005 10:36:00 PM 1 comment: 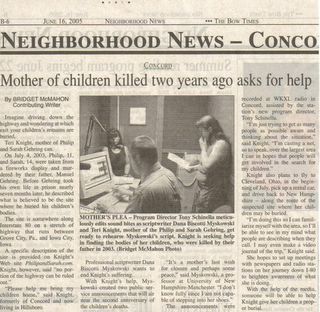 This story appeared in The Bow Times last week.

I forget the exact saying but it goes something about good works are those you perform when no one is looking. But every once and in a while, it is nice to get recognized for something good that you do for someone else. As well, this is the positive side of community journalism which sometimes is just reporting on corrupt officials, misused municipal funds and crime.

The death of the Gehring children was a terrible tragedy in our state, one made all the worse because the remains of the children have not been found. I will never understand why people do such horrible things. There was no reason that these children had to die. Almost everything in our lives can be resolved without death. I truly hope and pray that Teri can find her children and lay them to rest. She has strength and I know she will be able to find them.

Here is the site where you can learn more about the children and where they may be: [PhilipandSarah.com]. If you live anywhere between Grove City, Penn. and Iowa City, Iowa, along I-80, please take a look around and help Teri find her children.
Posted by Tony at 6/21/2005 08:37:00 PM No comments:

Email ThisBlogThis!Share to TwitterShare to FacebookShare to Pinterest
The Noise Top 30 chart for July
For a couple of years now, I have been compiling Boston radio station playlists and putting together a Top 30 chart for The Noise, Boston's local music magazine. The chart represents New England area bands which have received airplay on local music shows. I will be publishing this list monthly here and there will be a link to The Noise Web site where folks can find the list. Here is the Top 30 list for July:

So what else is going on?
Well, the rumors that Sen. John Kerry was going to call for President Bush's impeachment were not true. Nothing has happened so far in the Downing Street Memo situation but it is still early. Kerry seems to have chickened out on his threat. Typical ... And, why was he not a flip flopper again?
Posted by Tony at 6/12/2005 11:06:00 PM No comments:

Q1: Will Bush be impeached Monday?

The Internet and global press have been abuzz about something called The Downing Street Memo, written in July 2002 and recently released in Britain: ["The secret Downing Street memo"].
In the memo, British intelligence officials claim that the Bush administration was rigging intelligence to make the case for invading Iraq. Here is the suspected incriminating segment of the memo:


"C reported on his recent talks in Washington. There was a perceptible shift in attitude. Military action was now seen as inevitable. Bush wanted to remove Saddam, through military action, justified by the conjunction of terrorism and WMD. But the intelligence and facts were being fixed around the policy. The NSC had no patience with the UN route, and no enthusiasm for publishing material on the Iraqi regime's record. There was little discussion in Washington of the aftermath after military action."

This memo has been virtually ignored by the mainstream press in the U.S. and a Google of the words "Downing Street Memo" pretty much proves this, even though the story was broken in early May in the British press and clearly affected that country's election cycle since Blair barely hung on to keep his seat [Isn't it interesting that we hear everything about the Royals but nothing about this? We heard about Charles' second wedding to the woman whose tampon he once said he wanted to be; we still hear about Diana, almost eight years after her death; but nary a word about this].