So, I won five journalism awards on Saturday night ... 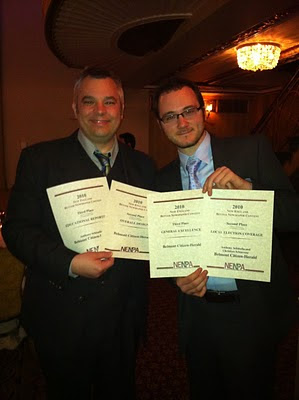 Here's the text from the online story on my work site about the NENPA Awards (formerly NEPA): On Feb. 12, staffers at the Belmont Citizen-Herald won five New England Newspaper & Press Association awards at the annual Better Newspaper Contest banquet.

The awards ranged from education reporting, election coverage, design and general excellence, and were divided into specific newspaper classes, based on circulation.

The Citizen-Herald received a third place prize in the General Excellence category for weekly newspapers of up to 6,000 in circulation. The staff submitted two editions of the newspaper for consideration. The judges stated: “The Belmont Citizen-Herald is full of community news. Readers come away with details of the town that are often missed by other papers. We like the ‘3 things to consider this week’ on the editorial page (you don’t need full length editorials on every topic).”

Editor Anthony Schinella and former reporter Christian Schiavone received a second place award in the Local Election Coverage category for the Citizen-Herald’s extensive reporting of Belmont’s 2010 annual town election. The judges liked the way the coverage reported on new ways technology has impacted campaigns, as well as the story on the candidate’s Facebook fans. The staff submitted six editions of the newspaper, including the extensive question and answer candidate features, which was created with the help of staffers at the Belmont Media Center.

Schinella received a third place award in Educational Reporting for his story, “Analysis: Officials using selective per pupil funding data.” The judges stated that the analysis piece was “a bit opinionated here and there, but overall a great statistical analysis.”

Schinella, along with pagination staffers for the newspaper, placed second in the Overall Design category for the newspaper’s July 1, 2010, edition which featured the “10 things to do this summer” front page. The judges said: “The paper presents an excellent 1A package. That momentum holds up inside the paper with the combination of charts and breakouts with nearly every story. On the whole, the paper presents the news in a navigable and easy-to-digest manner.”

Current reporter Patrick Ball, Schiavone, and Schinella, along with other staffers in GateHouse Media New England’s Northwest unit, received a second place award in Educational Reporting in the 6,000-plus weekly circulation category for the three-part series on the Minuteman Career & Technical High School, which was entered by the Arlington Advocate. The judges wrote: “What a truly introspective analysis of the inner workings and financial challenges of vocational schools. The writers did not get lost in the stats and charts. They told a story of the ‘alternative’ to mainstream education well, and they put a face on the reporting.”

This year’s competition drew nearly 3,000 entries. The work was produced by staff members at daily, weekly, and bi-weekly/monthly newspapers in all of New England’s six states. The entries, which were collected from September 2009 to August 2010, were evaluated by a distinguished panel of judges including journalism educators and lecturers, publishers from outside of NENPA membership, and others involved in the industry, including current and former employees at The Boston Globe, the Hartford Courant, the Houston Chronicle, the Providence Journal, the Burlington Free Press, and the Springfield Republican.
Posted by Tony at 2/13/2011 09:55:00 PM

Congratulations, Tony! Diligent and smart work pays off for the good guy.