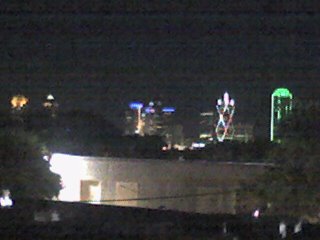 The night skyline in Dallas from the crappy camera on my Treo phone from the balcony of my inexpensive motel down the street from the ritzy Hilton where the 2006 NAB Radio Show is being held. Obviously, the view is not as impressive as Vegas.

Ah, Dallas.
I've been to Dallas a number of times now over the past 15-plus years - while touring with a small indie band in the late 1980s to a sales seminar and now, the 2006 NAB Radio Show.
Last year, the theme was "Radio revitalized." There was a lot of talk about the Hurricane Katrina situation and how radio, including the two big corporations which own most of the stations there, stepped up to serve their communities for once.
This year, it is "Redefining radio: The Talent to Lead; the Technology to succeed," like radio really needs to be redefined. I would assume that is trying to figure out other ways of relating to radio instead of just turning on the set. I'll find out tomorrow.
This year, NAB is also teaming up with Radio & Records Magazine to do a dual convention with both orgs so there are a lot of people here. I looked over the R&R agenda but it is mostly music stuff so I will probably be sitting out a lot of their seminars.
I really do like coming to these things because I really get a lot out of them. The seminars and training are very informative and you can find out the latest things in the radio industry in a two or three day spend. If it weren't so expensive, I assume more people would come. But I think it is worth the money. Unlike the annual NAB show in Vegas - which is truly overwhelming, addressing TV, radio, and film - this is geared towards radio only. So there is a concentration.
Getting here wasn't easy: I was up at 4 a.m. on the plane out of Manch at 6:45 a.m. with a stop in Philly and Chicago, which had a two hour layover - three if you count the time change - and then into Dallas landing just before 3 p.m. CDT - or 4 p.m. EDT. So, it was a 12-hour day before getting off the plane. A traffic tie-up on the Interstate and a packed shuttle meant it took an hour to go about 20 miles to get to the hotel.

Sidebar: I overheard this on the shuttle: A major radio personality, who is also a TV personality, is thinking about making the jump from regular radio to a satellite radio. A female exec for one of the companies was talking to another passenger on the shuttle and was trying very hard to not let anyone else hear her ... so I didn't get all the details. I sensed that this woman was talking about Sean Hannity because she said something about "Sean's itinerary," but I don't know for sure. No announcement will be made at the convention, she said, but it sounded as if it were something major. The company doesn't like the contract stipulations and the "No out" clause. Hmmm.
There was a report in the New York Post yesterday that Howard Stern may be leaving satellite to go back to regular radio. But both he and Sirius deny it: ["Sirius: Stern not going anywhere"]. Michael Harrison of Talkers Magazine was on "Countdown" on MSNBC and said he thought it would happen since Sirius has to figure out a way to make its $500 million back from Stern.

I came a day early in order to get a full start first thing tomorrow morning. If I left a day later, I would have missed an entire day of stuff or almost half the events. What is the point of that? Some of things tomorrow include a radio sales breakfast presentation, a talk on radio's future, stress free time management techniques, writing commercials which get results, two HD radio talks, important techniques for talk hosts and producers, a talk on podcasting, and managing the million dollar media rep ... and this is all before lunch! Obviously, one person can't go to all of them but at least you have some interesting choices. In other words, it is well worth the trouble and effort to get to this thing.

After settling into my inexpensive motel - I'm pleased to say I'll save more than $300 staying just a couple of blocks from the Hilton Anatole - I went over to the convention to register and check things out. None of the booths were open but I got a traditional convention bag full of crap and then got a beer [$6.75 for an Ultra - Yikes!] and kinda stood around listening to all the executive mucky mucks have their cocktail party.
Note to self: There needs to be a "small broadcasters association" of some sort either within or around NAB so us regular folks in radio can interact with each other and not have to talk about their stock portfolios or clusters of stations.
I then decided to check out the local food fare and after seeing some of the prices, decided to have some pizza and a salad delivered. I don't always do everything on the cheap but a $30 steak and a $20 cab ride to get to the steak is a tad much.

Four Red States in eight months: While sitting in the plane for hour after hour after hour, a few things struck me.
The first was how beautiful the damn country is. Cut away patches of light and dark greens and browns, hues of sienna and even some pretty filthy looking rivers and streams although the lakes and ponds seem to look pretty clean from the air.
The second was the fact that some of the tunes I picked for my mp3 player to listen to on the plane fit the mood of the flight ... the lofty "Soon" by My Bloody Valentine and "Untitled" by Interpol while flying through some whispy clouds; "This could be anywhere; this could be everywhere," an anti-suburb rant by the Dead Kennedys while flying over the sprawl of suburbia in Philly, Chicago, and Texas.
The third was how many porn shops are in the Dallas area. This is the heart of Red State country and there they all are. I thought it was only the evil liberals who condoned this stuff. Magazine porn shop, Christian church, strip club, church, etc. I noticed the same thing in Florida, South Carolina, Dallas on the last trip, and, well, Vegas, but there aren't any churches. I wonder if there is a theme there.

Texas politics: Not unlike a lot of states, Texas has a nasty governor's race going on.
Republican Rick "Good Hair" - as one Unversity of Texas columnist has nicknamed him - Perry is running for reelection against two indies and a Dem.
Right now, polls have him in the lead with about 35 percent, but that isn't a lot in a four-way race, according to the 11 p.m. news tonight [I didn't catch the channel I was watching].
Author and satirist Kinky Friedman is running as an indie and shockingly has about 25 percent of the state's support ["60 Minutes" did a profile on him a few months back which was hilarious]. Another indie, Carole Keeton Strayhorn, the tough, fighting grandma, has about 13 percent but between 10 and 12:30 p.m. tonight, I saw three of her TV ads, which were actually pretty good. Chris Bell, the Dem, has 23 too.
The channel is sponsoring a debate on Oct. 6 and it is pretty amazing that they are including all four of these candidates. Huh, Texas media, more open than Massachusetts or Maryland. Who woulda thunk it?

"For it all" Deval wins primary: In Mass., Deval Patrick routs Chris Gabrieli and Tom Reilly to become the first black to head up a statewide Democratic ticket in the state. Tim Murray, the Mayor of Worcester, won the lieutenant governor's slot against two businesswomen - Deb Goldberg and Andrea Silbert - who both seemed more qualified. Patrick will now face Lt. Gov. Kerry Murphy Healey, millionaire businessman Christy Mihos, and Green-Rainbow candidate Grace Ross, who is actually getting covered in the Boston Globe. Shocker.
If signs at gas stations count for anything, Mihos will win ... hahhaha ... that was a joke ... But, signs don't vote so ...
Another interesting point: While vacationing on the Cape recently, I didn't see one Murphy Healey sign anywhere. The Cape is the heart of GOP country in Massachusetts and not a sign to be seen. Yikes!
Posted by Tony at 9/20/2006 12:03:00 AM