Sigh ... Eyes Without a Face

I finally got to go check out the memorial. It was an amazing experience.

Here's a short video clip of the Soldiers' Monument and some pictures. 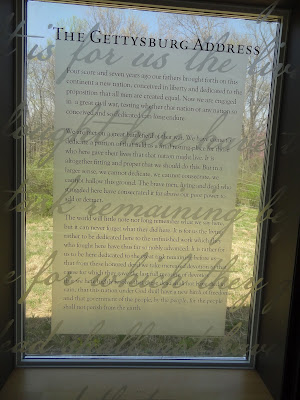 Two views of the Gettysburg Address ... the address itself and criticism of the words and the event ... and we think today's media is bad? 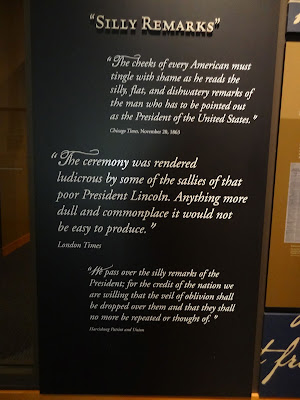 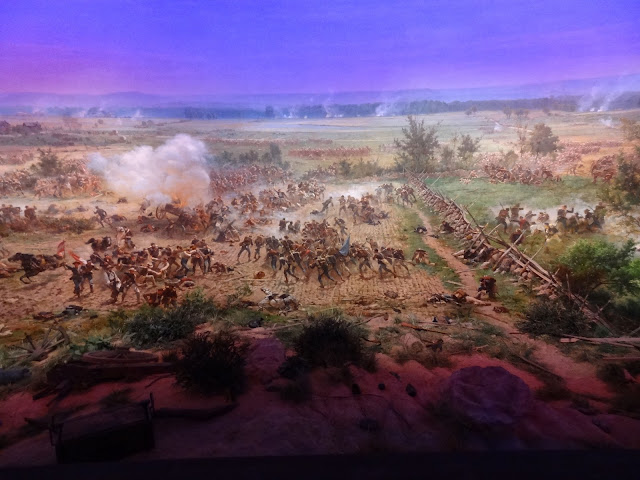 Above is a picture of the Cyclorama display, an amazing, massive one piece painting that is hung up in a rotunda. The painting depicts one of the battles from the artist's perspective. This photo doesn't do it justice, since it is only one small section of the painting and model display at the bottom, where I was standing. The painting was done in France based on what the artist saw during the battle. Pictures and slides were also taken and used to recreate the scene. The painting was sent to the United States in the 1880s and was restored a number of years ago. The museum has added light accents, sound, and narrative to the presentation to put you into the actual battle. No flash photos - understandable - or video  (bummer dude) were allowed. It's like nothing else you'll ever see. 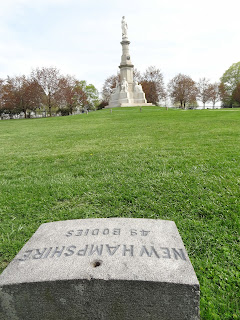 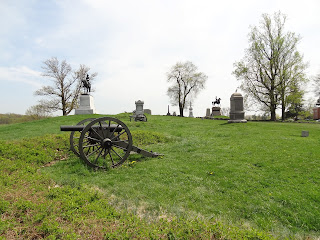 The New Hampshire stone at the Soldiers' Monument. A view from the top of Cemetery Hill, one of the skirmishes from the northeast side of town. It was also the scene of the first Confederate win of the three-day battle. 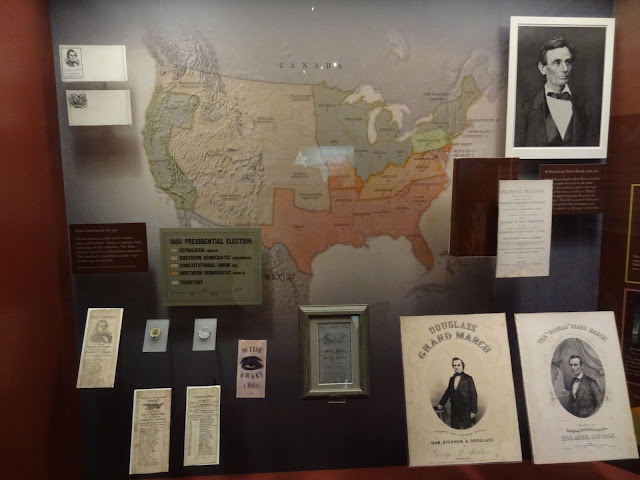 OK, so you think the 2000 election was bad? This is the Electoral College map of the 1860 election with four candidates facing off. Two of the candidates were pro-slavery; one was neutral. Lincoln and the Republicans didn't want slavery expanded to the other territories (the beige area between California and the other states). Lincoln received less than 40 percent of the popular vote but won 59 percent of the Electoral College vote and the election. Had there been no Electoral College and had the pro-slave political side of the aisle not split their vote with two candidates, Lincoln would have lost the election and we probably would not have the nation we have today. While many people believe the Electoral College is undemocratic, the Founders, quite brilliantly, put the mechanism in to keep mob rule from controlling the presidency and keeping the country from becoming a monarchy. It still serves its purpose today, despite what some people may think. 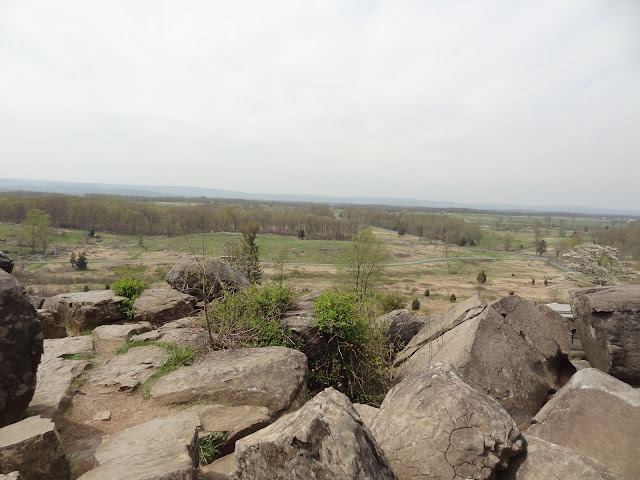 The view from Little Round Top, a strategic point of the town that was almost lost by the Union forces, quite by accident. One of the generals, disobeying orders, believed he should be posted down on the ground to the right of the picture even though he was told to be up where the rocks are. A Union scout was sent up to the rocks to check on things, saw that there were no troops there while Confederate soldiers were off in the distance on the left of the picture, heading to the top. Troops were quickly assembled to hold the hill a few minutes before Confederates arrived. Historians believe that this was one of the key moments of the three days. Had the Confederates controlled the hill, they would have been able to bombard Union troops on the right and traveled south into town, taking control a small chunk Pennsylvania while winning the psychological war Lee was trying to fight against the Union states. 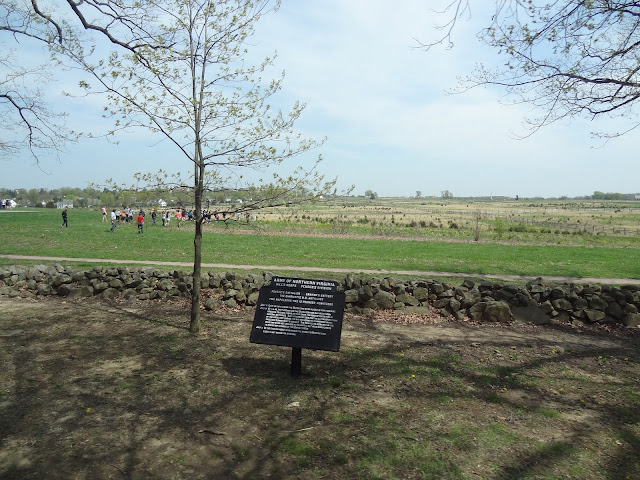 This picture is a bit blurry because I took it from the bus but the children are reenacting Pickett's Charge, the last and bloodiest battles of the three days. Over to the right, off the picture, is where Little Round Top is located; the center of the picture, just to the right of where all those houses are, is where Lee made his last - and unsuccessful - run at the Union forces. The Union cannons had stopped firing because the entire field was covering in smoke. Lee believed - like every other battle before this one - that the Union forces were retreating. In actuality, Meade and his forces were playing possum, waiting for the Confederates to charge, getting close enough to bombard them with more cannon fire.
Posted by Tony at 4/27/2013 06:07:00 PM 1 comment:

While I am completely immersed in local, online news, one thing I still think is cool about print is a chart like this. 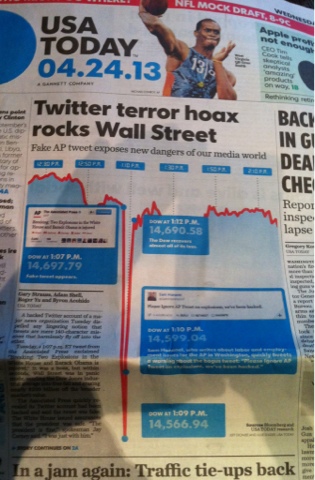 Heartbreak Beat ... those were the days