One of the most influential musicians of all time, Lou Reed, has passed away, according to Rolling Stone.
I think I'll put together a tribute show this week on WNHN at 9 p.m. on Wednesday but an hour can't possibly do his output justice.There are so many songs and they mean so much to so many people, including me. He really helped me through some rough times. I could always put it on and be taken somewhere else, even for a short time.
When I heard the news a little bit ago, I came upstairs to listen to some of the tunes. I also thought about all the songs I've covered by Reed and the Velvets over the years, so many great songs ...
"Temptation Inside Your Heart" with Lovers & Other Monsters (LVRS) and my brother singing with us at Thum's in Concord in 1993, a few months before he passed away.
When I was in this band Jet Velvet, we used to play a sloppy, bombastic version of "White Light/White Heat" (we had a female vocalist, so it was a bit different).
Joel Simches and I did "Ocean" at the Middle East one night just the two of us - me singing and strumming acoustic guitar and him on synths - it was simply amazing. I remember that one like it was yesterday, the crowd sitting in silence listening to us play it.
"Heroin" at the Jerry Brown fundraiser at the Middle East in 1992 with LVRS and members of Womb to Tomb, Curious Ritual, and others jumping up on stage with us for a monstrous extended version of the song that seemed to go on forever. Good times, indeed.
When I "retired" from playing out, I would still play Reed/Velvets tunes.
"I Love You Suzanne" was one I would play for my son when he was little, changing Suzanne to his name, while he would dance around the kitchen. I was just playing "Vicious" the other day on the acoustic; I've had "vicious, you hit me with a flower, you do it every hour, you're so vicious" swirling in my head for days. OMW, "Sweet Jane," "Rock 'n' Roll," "Who Loves the Sun," "Pale Blue  Eyes," some of my favorite songs to sit and strum and hum ... tons of fun ... these are just the songs I liked to play, never mind the ones I liked to listen to.
I can't stop weeping. What a effin' drag. RIP Lou. Thank you for everything.

You can't be first all the time

The New Hampshire Press Association Better Media Awards were held last night and Patch took three of them out of 86 potential slots in the daily and special categories.
Of the three, I won in the Champion of Right-to-Know category, for my series of stories on how former Concord School Board member Jack Dunn was hired to be the district's business administrator, and the Concord NH Patch site, which I edit and manage, also won second place this year in the Best Website category.
Patch in New Hampshire won three last year, including Best Website for Concord, social media in Portsmouth, and Merrimack for a video, all first place prizes.
I know that the Patch team put together a ton of excellent work this year and submitted a lot of entries - a lot more than last year, probably around 40 or 50 - and it was disappointing that more of that work wasn't acknowledged by the judges.
This is one of the burdens of being online only - print is still at the forefront of people's minds (especially those who work in the print industry), with cool layouts and big pictures, something that online news orgs haven't figured out how to replicate yet (which is understandable, since all content management systems have a standard template to work from).
Last night, at the awards ceremony, I got to thinking about it again, since the lopsidedness was so prevalent. Watching a handful of people win a slew of awards because there seemed to be so little competition in the categories was great for them. But what about the other journalists doing high caliber work? I mean, it's great to win anything at all. But if you're going to hold a race, shouldn't all the participants be competitors in the same class?
Imagine for a second that there was a 100 meter dash with six racers - five were 10-years-old and one was 20-years-old. The 20-year-old would, obviously, trounce the kids, every single time. This might be an odd analogy for some - reporters for news orgs aren't 10. But it's kind of the same when a daily news website in a small town is competing against a daily news website in a big city or a daily print newspaper in a big city with an active website. Get what I mean? It really shouldn't be competing against a big city - it should be competing about its equal, a weekly newspaper. They are in different content classes. Of course the bigger locations are going to have access to better staffing and potentially, staffers, as well as more opportune moments to write stories and take dramatic pictures.
At the New England Newspaper and Press Association, formerly the New England Press Association, the annual contest categories, linked here from 2012, are in tiers, based on weekly and daily circ - Daily Class 2 is 30,000 or more; Daily Class 1 is 30,000 or less. Weeklies run in classes that are 6,000 less or more; there is also the bi-weekly and monthly categories (In 2011, I won or co-won five awards).
Now, for NENPA, online news outlets like Patch and GoLocal are not allowed to compete because it's a "better newspaper" contest not a "better media" contest. That should probably change too, especially because online news has grown so much in Massachusetts, where most of the NENPA newspapers are from, and around New England. But you would never see, in the NENPA contest, a city daily competing against a small town weekly. It wouldn't happen. And it shouldn't happen with online news outlets either.
Absent circ numbers, unique view audience classes could be matched up with circ similar to what is done at NENPA. Or, the population of the main community served by the website could be used as a tier instead of weekly or daily. This would allow news outlets that compete in smaller communities to actually have a fighting chance at competing for awards, without the hidden and obvious bias of the way that news is delivered to readers built into the acknowledgment of excellence process.
Personally, I'm always happy to win anything, first, second, or third, it doesn't matter. A co-worker joked to me that he didn't think they would give us first place two years in a row. Frankly, it's not a huge thing; second is fine. But I hope that some changes in the structure of the awards can be considered in the future so that all the great work of my colleagues can be awarded too.

A couple of cool shots here ... the clouds slowly moved in to hide it again. 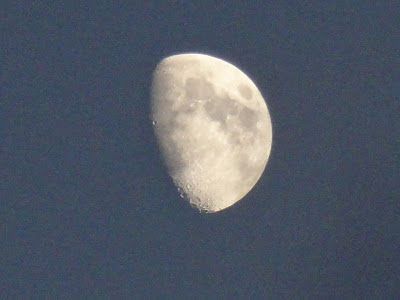 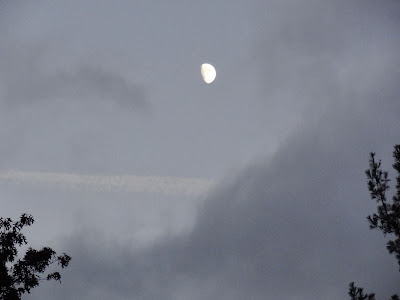 Yes, it's time to Dead Yourself again! 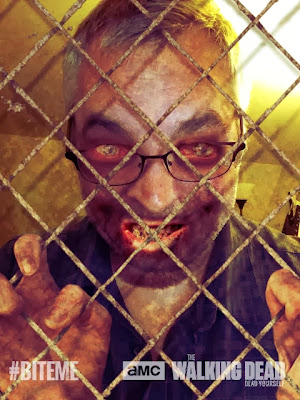