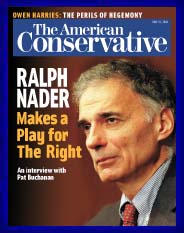 The cover of the 2004 campaign? Ralph Nader makes a play for conservatives.

Conservative commentator and former presidential candidate Pat Buchanan lobs a softball interview to Ralph Nader in the latest edition of The American Conservative Magazine: ["Ralph Nader: Conservatively Speaking"]. This is pretty amazing stuff and clearly proves the case Nader has been making: He can appeal to both conservatives pissed off at President George W. Bush and liberals who are just not going to vote for John Kerry. Combine this with the efforts of conservatives across the country to get Nader on the ballot in states and donate money to his campaign, and Nader's strategy seems to be working. With Kerry's current Electoral College lead over Bush in most surveys and we will have a new nation by November! Conservative-Naderites - a new political designation? Maybe after all.

U.S. Senator from N.H., hmm ...:
It really sucks to be Democrat N.H. state Sen. Burt Cohen right now.
For the last 18 months, Cohen has been gunning for Republican Sen. Judd Gregg. And why not? Sure, Gregg isn't as bad as most Republicans - but he is still pretty bad. With Kerry looking good here, maybe Cohen could pull off a miracle. Cohen had some pretty good radio ads but didn't seem to have as powerful a message as other Democrats. While he was quick to criticize Republicans, he was tentative on solutions to the issues - which was a problem. But somebody over at the campaign was pilfering campaign funds: ["Sources: Cohen Campaign Funds May Have Been Stolen"]. The fledging PoliticsNH site broke the story first: ["Cohen drops U.S. Senate bid one day before filing period ends"] while word spread around the Web about what was happening.
However, what a tempting situation. Apparently in N.H., registered party members don't have to collect signatures, all they have to do is sign up for the race and they are on the ballot. How easy is that? But just when all hope is lost, the Democrats have a true champion who signed up to run: Granny D!: ["Granny D and two others file for U.S. Senate"]. As the song goes, Go Granny go Granny go Granny go! You have my vote for sure.

In other political news ...:
U.S. Rep. Mike Capuano, D-MA-8, escaped a real close one after former Ambassador Charles Stith decided not to challenge him as an independent this fall: ["Stith decides against a run for Congress"]. And here is my old bud Paul Simmons - finally getting into the papers - by shooting his mouth off in the Boston Phoenix: ["STITH VERSUS CAPUANO"].

"Stith would be road kill," Simmons says. "Capuano is arguably the best field politician currently in Massachusetts, as he proved in the 1998 race. I wonder if this isn’t some sort of trial balloon, because Charlie Stith never struck me as being politically stupid — and it would be stupid to the point of masochism for him to run."

Ouch. While Simmons is probably correct - Stith would lose - he would hardly be road kill, one of Simmons' fave expressions. It would have been a difficult race. Stith was planning on running as an independent - a very difficult task, especially with the arrogant media, who would probably ignore his campaign. However, Stith could easily lay the ground work for 2006, when Capuano is most assuredly going to run for governor against Mitt Romney. And let's be honest: While there is all kinds of talk about "diversity" in Massachusetts, they always manage to find a way not to actually implement diversity. Twelve white males representing them in the Senate and Congress. What an example. There are more black Republicans in elected office in most states then there is in Massachusetts. While Capuano is an okay rep., a Stith campaign would have been a good thing for the state and the black community.

"You say times are tough ..."
Who says ex-rock and rollers can't run for public office? Here is one of my faves, Peter Garrett, running for a Labor Party seat in Australia: ["Ex-Midnight Oil Singer Runs for Office"]. There is hope in the world.