How Bush could slaughter Kerry

I don't subscribe to the New York Times but thankfully someone sent me this post: ["The Multilevel Marketing of the President"]. Great. Just what we need to hear. The Republicans are using the Amway method to win Ohio. If they are doing this in Ohio, they are doing this everywhere. And if they are doing this everywhere, John Kerry is doomed.
But let's be honest here: Is anyone surprised? Sure, I am waiting for Kerry to pick his VP but I have to say I am pretty disappointed in his campaign so far. He has done nothing to defend himself against the very powerful ads revealing his flip-flops. Of course, what can he do? The ads are basically true. And the ads are doing surgical damage to Kerry. It is almost as if the Bush folks couldn't wait for Kerry to win even though they were telling everyone that they were actually hoping for Dean! 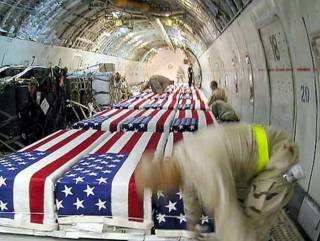 The body bags of American soldiers being shipped from Kuwait back to the states.