Everyone is talking about the Bush tax cuts that will expire at the end of the year. It's kinda funny how these things just magically come up for discussion at certain times.
The biggest theme - from cranks like Alan Greenspan to data forwarded by the Congressional Budget Office, in the chart below - is that the deficits will balloon huge amounts if the tax cuts (officially known as the Jobs and Growth Tax Relief Reconciliation Act of 2003) are allowed to continue: 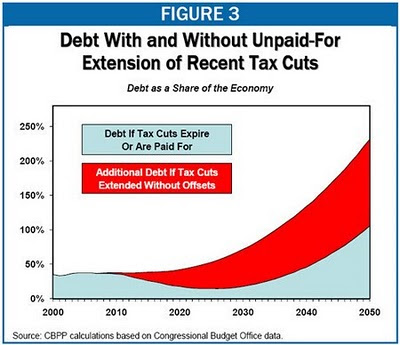 First, does anyone trust a damn thing that Greenspan has to say at this point? Not unlike Dick Cheney, he needs to shut up and go away. His policies and beliefs have done more to destroy this nation than anyone else's.
Second, the problem with this data is that it only tells one side of the story. It assumes revenue collected by the government from the taxes only. What it doesn't show is lost business - which also creates revenue for the government - from hundreds of billions being pulled out of the private sector economy each year and put back into government. The Bush tax cuts, if allowed to expire, will result in $3.5 trillion being pulled out of the economy during the next 10 years and put into government coffers. When you plug ALL the data in, the results are probably much different than what this chart shows. It's the same premise as the federal stimulus money only it's private sector money.

Here's an example: My share of the Bush tax cuts, the last time I looked, was about $600 or $800, if I recall correctly. A pizza and a coke a month, as the talking points went at the time. But, if you live paycheck-to-paycheck, that pizza and a coke can be very nice once in a while ...
But beyond the selfishness of being able to keep more of my money to buy a pizza and coke every once in a while, let's pretend the tax cuts expire. More money is pulled out of my pocket. I have less to spend - and so do tens of millions of others - instantly. If I don't spend that $50 to $60 a month, the store down the street - or wherever - doesn't make the sale. Fewer goods and services are bought and used. Fewer people are getting paid.
Since I live paycheck-to-paycheck, like many, many others, I will have to cut more if the tax cuts expire. Essentially, it's a $60 per month tax increase for folks like me. It's not like we're going to go out and work a second job or something to get the $60 back. We're going to suffer and cut more.
But how much more can we cut? We already shut off the land line, we already have the cheapest cable available, we don't take vacations, we don't eat out, our cars are gas misers, we're lucky if we have pizza once every three months or so. So, what else am I supposed to cut to make up for the $60? What is everyone else going to give up so that the government can waste more and more money on bank bailouts and state trooper pay details?
If you're in the upper brackets, it's multiplied. And that's the controversy. Lots of people who have lots of money pay a lower rate. But, do they? According to the WSJ, taxes paid by millionaires more than doubled between 2003 and 2006 due to the law. So, millionaires paid more in taxes with a lower rate. How did that happen? Well, they made more money and paid more taxes!
Rich people tend to invest their money in businesses and banks. Those businesses hire people; the banks lend money. If this money is pulled out of investment, fewer people are working or hired, less is being spent, etc.
Frankly, do I think millionaires should get more of their money back? No, probably not, even though I'm not worried about class warfare. The Obama Administration says it would like to keep the cuts for people making less than $250,000 in place, which would help folks like me. But the expiration of these tax cuts will cost me and many others a good chunk of money - money we are currently using to survive.

Now, if the federal government is serious about paying down the debt, it needs to start worrying about cutting spending - like cutting defense, corporate welfare, foreign aid, and other things, as well as raising targeted taxes, like transaction taxes on Wall Street. I talk more about deficit reduction here: ["'Frontline' show on debt"].
There are answers to the problems ... raising taxes on po' folks and the working class should not be one of them.
Posted by Tony at 8/01/2010 09:58:00 PM