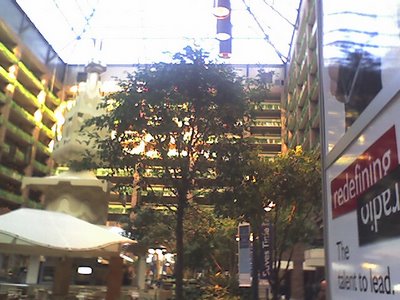 Here is the foyer inside of the Hilton Anatole Hotel in Dallas.

Well, technically, it is Day 1.5 since the event opened last night for a few hours but since those were only social hours, I guess they dont really count. The National Association of Broadcasters hosts two annual conventions during the year: Its regular convention in the spring which is held in Las Vegas and its fall Radio Show, which is held at various places around the country. Last year it was in Philadelphia. This year, it is in Dallas. The Vegas show is a massive event and one of the great things about the radio convention is that it really does concentrate on radio. The Vegas convention covers TV and film along with radio and also is co-hosted by the Radio Television News Directors Association. It does have a lot more features and a lot of cool gadgets. But, in some ways, it is too big.
I got up early and headed over to the convention center for the first round of sessions. During the first time attending NAB, I pretty much stuck with sessions that dealt with news content, programming, or other things of that nature. For the second one, I attended a mix of sessions about programming, news, sales, and marketing, with the intent of getting as much information as I could. During the third one, I attended a mix but admittedly was distracted by a lot of work stuff that I really didn’t get the full potential of the event. However during this one, I have mainly concentrated on leadership, management, and sales sessions, with the hope that I could learn even more about being a station manager.
What I found was that I already knew quite a bit about what some of the lecturers were saying. But, that is a good thing.
Instead of attending the more “fun” sessions like the future of radio or the talk about getting results for clients via more creative commercial writing, I attended the stress management talk. Now, someone who does the job of three or four people can expect a bit of stress in their lives. But at the same time, you want to figure out ways to get your job done faster and be able to manage your employees without having them all quit on you. I expected this talk to be pretty boring but it actually wasn’t. It was pretty interesting. The consultant, Debbie Waggoner, of Nodus, Inc., did a really good job in explaining how to limit your work stress by planning out your week, every week, and manage people better but at the same time, controlling the whine factor.
She used a creative example by have a huge vase full of sand at the bottom and small rocks up to the top and then asked a volunteer to put another half vase worth of big rocks into the already full vase. Of course, it was extremely difficult and the big rocks were barely piled on at the top and eventually, a couple fell out.
In the next example, she dumped out the sand gravel and asked the volunteer to fill the vase with the big rocks first and then the pebbles and then the sand, which filtered around all of the rocks. Almost everything fit into the vase.
But that was the point: Most people don’t make time for “the big rocks” first because they are bogged down with the sand and pebbles. The reverse should be true and it was a really good point.
Some other points included: Retaining key personnel is critical and making sure you spend time with them is a good thing and wards off career changes. Set aside time at the end of the week or on the Sunday before work to set up a weekly plan for the week. It’s important to be able to tell the difference between important things and urgent things, and to act accordingly.
I felt bad for Debbie because she did a great job but as I peered around the room, I saw a lot of sleepy and lost faces in the ground. Not too many people stressed although they looked tired.
Next, instead of attending talks about Podcasting, HD Radio, and how to not sound like an idiot, I went to the talk on how to make and manage your million dollar media rep.
This session, hosted by Michael Guld, had a lot of great tips on how to keep people motivated. The best thing to do though is to start out by hiring the best people in the first place. The wrong hire can be a disaster, he said. Hire the smile and then train the skill and then he went through a bunch of strengths and weaknesses a company must look at when hiring people for sales.
After lunch, which featured former Dallas Cowboys’ quarterback Troy Aiken, I went to a talk about how to find new employees in a small market job pool and then later, how to develop a good farm team. Both sessions had very good material in them and I learned a lot from them.

Tomorrow will feature the FCC Breakfast talk early and then I think I will attend the small market operators, big market thinkers talk and probably attend the keynote session featuring the president of NAB and some guy from Harley-Davidson. After that, there will be a talk on radio and the consumer’s mind, another talk about retaining team members, and then a meeting of the Small Market Operators Caucus, a new group which has formed to network small market radio owners together, something that is badly needed within this organization.

Although the sessions were pretty stellar one thing that was really a let down is the exhibit hall. Almost all the stuff was both big money things – like Google and Arbitrons – or lots of technical things like transmitters and things geared towards engineers. In addition, there were almost no vendors attending who hadn’t attended previous NAB events. Meaning that the exhibition booths – a major part of the process for going to one of these events – weren’t as impressive as the past. Oh well.

One of the other things I enjoy about coming to these conventions is all the free stuff. I got a bag full of free crap when I registered. None of it was really that impressive – lots of magazines, CDRs with material on it, note pads and pens – but sometimes, you get some cool things. This year, besides the other stuff mentioned, I got a sunglass holder which clips onto your car visor, which is cool. I also entered into some contests for free iPods and a free Apple laptop.

After the sessions, I decided to head back to the hotel room. Instead of getting food delivered or going out to a fancy meal somewhere, I went over to this hole-in-the-wall place called Buck’s Prime, which featured mesquite-grilled burgers and cold beer and soda in a cafeteria-like atmosphere. I had a messy chili-cheeseburger, which was really tasty, along with a couple of beers and skimmed through most of the Dallas Observer, a free local weekly tab ala the Village Voice, which had just hit newsstands.
Frankly, I was enthralled by the lead story, “The Reverend Freak,” about this black pastor who allegedly raped and assaulted women in his parish ["The Reverend Freak"]. The sidebar to the story – about the two female reporters not being allowed to leave the sanctuary after scoping the place out – was a good read too.

I headed back out into the Dallas night after eating and a light breeze blew hot air all around me as I tried to cross the boulevard. It was an eerie feeling – being completely covered in this warm breeze – but it is good to get the sense of other climates and places. I looked at the skyline for a few minutes and then went into my room to do some reading and work.
Posted by Tony at 9/21/2006 12:48:00 AM

Email ThisBlogThis!Share to TwitterShare to FacebookShare to Pinterest
Labels: Radio