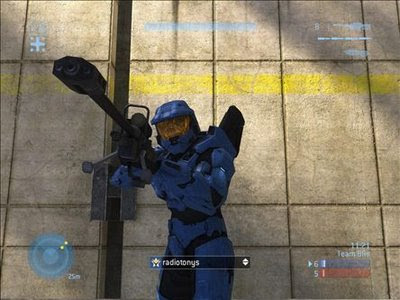 Two screen shots from a recent Halo 3 game played on XBox Live online. Above, I'm ready for my [sniper] close up. Below, I get blown up by an opponent using a Needler, an orbed shaped gun that shoots pink spikes through the air that later explode inside the target. 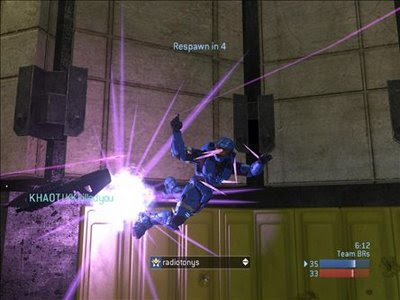 For months now, I have been playing Halo 3 on Xbox live online. It happened quite by accident.
Before I even bought my Xbox 360, a friend of mine bought me a gift certificate from Microsoft to play my regular Xbox online. Instead of us old guy gamers trying to find a day when we could all get together, we could just hook up online and blow things up there. I never got around to using it but continued to play every once and a while with my buddies, on random Sundays when I could disappear from the family for a few hours. Then, I upgraded to the 360 and was told, emphatically, that I had to play online.
So I signed up and for about four months, I have been playing online. It is, in a word, amazing. The stress relief alone is worth the hour or two [or sometimes three] spent playing this game online with hundreds of thousands of other potential players [some nights, there are as many as 300,000 people online playing Halo 3 globally, a pretty scary thought when you think about it].
During the time I have been playing, I've met some interesting people online. In fact, I have only played with my buddies a few times. They are both state employees and have to get up very early whereas I get home late and can play into the evening [when it doesn't cut into family time. I, frankly, find it a heck of a lot more relaxing and compelling than sitting there watching pretty bad television].
I am surprised at how many adults are out there playing too. While I haven't met anyone physically, you can get a lot from people listening to their voices [gamers have headsets connected to the controls that allow you to have conversations during the game]. Sure, there are some jerks out there, just like there are trolls on Web sites. But for the most part, people seem to be having a good time blowing things up.
One of the more hilarious things about playing online is going up against some really good players who are kicking you butt and then, at the end of the game, hearing the squeaky voices of young teenagers say, "Good game, good game ..." It totally cracks me up. I'm getting my ass kicked by a prepubescent boy!
I usual play in Team Slayer mode, four on four. The game randomly puts you in with other players with similar rankings but it can be a hodge podge. If you find some good players, it is in your interest to team up after that game, so that you can get your ranking up [I'm at 13, Lt. Grade 3, although it says I'm a Major Grade 3. I have been as high as 14, with 663 total games played online].
Some people take the entire thing way too seriously. For example, it takes me a few games to get warmed up. So, I tend to score low when I first get on. This can tick some of the more serious players off because if you don't get your fair share of kills, it brings the entire team down. I don't know how to resolve this problem beyond continuing to do the best that I can. But some folks really lose their minds, yelling after they lose or saying you suck. Hey, I'm friggin' 43, playing at 10 p.m. at night after a busy day at work. Cut me some slack.
I also don't like to hop around the maps like some players do. They bounce around like frogs trying to not get hit. I like to hunker down with a sniper rifle and ping people off. through the scope. Some players are smart enough after a few kills to come get me because I can't see them in the scope until they are right in front of me. So, my position tends to be strategic rather than just randomly killing off opponents. That said, if I don't see a lot of action in the map, I will go out there and try to hunt opponents down too.
And the total geek effect really kicks in when I go to www.bungie.net to check out my stats. It's all digital, they keep track of everything. So far, I have 73 "killing spree" medals, 155 "double kill" medals, 426 plasma [or sticky] grenade attacks, with 110 kills from the grave - meaning, my actions just before dying took out another player. I've also ended 162 of my opponent's killing sprees [called a Killjoy]. Twenty one percent of my kills have been via assault rifle, 14 percent plasma grenade, and 13 percent sniper. Personally, my favorite weapon beyond the sniper rifle is to drive into people with the Ghost, a jet ski like hovercraft that has laser guns. I can even save games online and go back and watch them from different angles or save screenshots, which you can see above, which are then downloadable from the Bungie site.
That all said, I'm beginning to sense that I am "wasting" a lot of time playing Halo 3 online. When my renewal came up, I spent a few minutes debating inside my own head whether I should spend $20 for the three month subscription or go all out and get the 1-year subscription for $50. I tend to buy in bulk in order to save money, especially on things I know I'm going to use. But, at the same time, I began to wonder if I really wanted to spend a ton of spare hours over the next year in Halo 3 land. There just isn't enough time in the day to do all the things you want to do outside of work. I ended up buying the three month subscription. For now, it's a very good time.

The new Boston Globe
I finally got a chance to really take a hard look at the new redesigned Boston Globe. I haven't been a regular reader of the Globe in a very long time. I have purposely chosen not to buy it. I have had run-ins with them over the years and don't think I have been treated fairly by its reporters or columnists [I have written about these issues previously. No need to go into them again]. I also don't agree with its editorial policy [even though I tend to be more liberal on issues than conservative].
Essentially, what they have done is what most newspapers in the world are doing: They have whacked a slew of pages and focused more on short, snappy stories. They have also put all their TV, movie listings, and some arts stuff in this new "G" section [When it first came out, all of us at work started jokingly referring to the mighty Globe with catching G-comments. I liked mine the best, "As thin as a G-string ..."].
But here is what is striking about the Tuesday edition: The A sections, two at a total of 32 pages, contained 13 - yup, 13 - full page Macy's ads ... 13!! So, basically, you paid 75 cents to have a front section that was more than a third Macy's ads.
Of course the bad news is that the Globe is losing millions of dollars per week. I mean, it's a disaster, not unlike a lot of newspapers, and there isn't a lot they can do about it beyond busting their union and using wire copy, something they aren't going to do ... yet.
It is a sad state of affairs when a newspaper as important as the Boston Globe because such a disaster. But, you know, maybe its just desserts when you consider the harm they have done to some people over the years.
Posted by Tony at 11/19/2008 07:59:00 AM