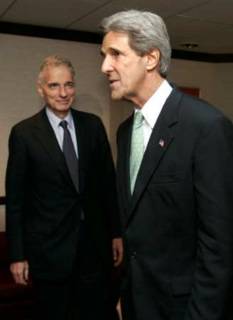 "... the difference between a spruce tree and petrified wood."
Another great line from Nader after his meeting with Kerry yesterday: ["Kerry begins effort to woo Nader"]. I don't quite agree with Nader on this one. Is Kerry a more acceptable Democrat than Al Gore? Barely. As noted before, the similarities between Bush and Kerry are pretty shocking: ["Will the Real John Kerry Please Stand Up?"]. Actually, the new Gore - the populist one, the one who has railed against Bush in a couple of speeches - is the Gore the nation needed in 2000 and the kind of Democrat the nation needs right now.
On the flip side, I have to wonder: Maybe Kerry's low-key strategy is working. He has remained dead-even in most [irrelevant] national polls, with Nader drawing as much as 6 percent while at the same time not doing anything to get voters to support him. He has had what, four different campaign themes? ["Fighting for us," "Let America be America again" ... Whoever thought that one up needs to be fired on the spot] Kerry has been goofing off, skiing in Idaho, riding his bike through Concord, Mass., etc.
But look at this: In state-by-state polls - the ones that will award the Electoral College votes needed to be elected president - Kerry is surging: Kerry 289, Bush 243 in one; Bush 276 to Kerry 262 in one put together by a Republican Web master [I'll update the state-by-state numbers on Sunday].
And all during this time, Bush has been hammering away at Kerry, with targeted negative ads pointing to Kerry's flip-flopping. The president is shockingly spending like a drunken, allegedly coke-sniffing, bankrupt oil speculator: ["Bush to launch new anti-Kerry ad blitz"]. Oops, sorry, I forgot, that was what the president used to be.
At the rate he is spending money, Bush will be broke soon. With Nader attempting to gain the votes of disaffected Republicans, the possibility of a Kerry victory seems pretty good.
Then again, can Kerry keep it together? It is still early. Anything can happen. And many of us remember the American Research Group poll of 50 states posted in late September 2000 showing Gore with a 70-plus Electoral College lead and Nader close to getting 5 percent - enough to secure major party status for the Green Party. Gore then huffed and puffed through the debates, blew his lead, frightened millions of votes from Nader at the last minute costing the Greens their status, effectively "won" the presidency but then didn't fight hard enough for it in the Florida recount fiasco, and then allowed Bush to be "selected" by the Supreme Court.
Will this mess happen all over again?

More controversy [and logic] from Hollings:
I was one of a few thousand people who voted for South Carolina Sen. Ernest "Fritz" Hollings in the New Hampshire primary back in 1984 when he ran for president. I got to see him speak at two events during the campaign and admired his stance on the balanced budget amendment, the nuclear freeze, and his strong position with organized labor. I have also followed him during his almost-40 year career in the senate and respected his work fighting for American workers. But like all spirited pols who shoot their mouths off, Fritz has never been too far from controversy.
The latest is a column he wrote accusing President Bush of invading Iraq to take Jewish votes away from the Democrats: ["Why we?re in Iraq"]. While the statement is a controversial one, there may be some truth to the comments. And Hollings isn't the only one who feels this way: ["Senator spoke for many on Hill when he blamed Israel for war"] and ["Senator Hollings Is Right"]. Hollings has since been attacked for being "anti-Semitic."
Unfortunately, as I have stated before, Americans can't have a serious conversation about the influence of Judaism in some sectors of our politics and this is a real problem. Americans freely attack "rightwing Christians," we freely criticize "secular humanists," we ridicule "radical Islam" ... so why can't we talk about Judaism and the influence of preserving Israel has on our foreign policy?
In some ways, religion and race aren't to blame for these problems. Our nation - its soldiers and taxpayers - is cleaning up the mess of Great Britain and the United Nations who cut up the land holdings in the region and awarded them to dictators and monarchs and the creation of a Jewish state in a holy land of both Jews and Palestinians - warring factions who have been fighting for centuries - based on race and religion. So, it still comes back to the religion issue.
In other words, we are fighting unwinnable battles, unwinnable wars, with unending death, with people who don't really want peace. When will our nation learn? When will we walk away?
Posted by Tony at 5/21/2004 07:13:00 AM