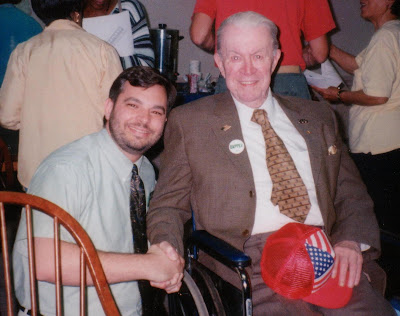 What can explain his staying power? It's more than nostalgia, more than the entertainment value of a profane pol who recorded the novelty tune, "The Irish Belly Dancer,'' more than grizzled old white guys giving him bullet votes.
It's visibility. The long hours at the zoning board - so many hours that they named the hearing room after O'Neil. The countless community-group meetings. And, of course, the wakes.
"I differ on ideology with him on a lot of things but he's always there for us,'' says Anthony Schinella, a board member of the Community Alliance of Mission Hill.
Another supporter, Minister Don Muhammad, head of the Nation of Islam's Mosque No. 11, says the conservative O'Neil is misunderstood: "He's very community- and people-oriented.''

Me and Minister Don Muhammad, quoted in the same article, supporting a guy that most people pigeonholed as a rightwing, lunatic, racist throwback to the old days.
But, in many ways, Dapper was a throwback: He was about hard work, sticking to your word, never giving up a principled fight, and standing by the little guy. And those are values you just don't see very often in politicians these days.
Rest in Peace, Dapper.
Posted by Tony at 12/19/2007 10:22:00 PM

Tony, Great story. Good stuff. I love the line asking where you came from, "kid." Dapper was one of a kind.
Bill O'

good job, Tony... my politics reflect yours but I always had a soft spot for Dapper. A total character...

Tony, thank you for your insightful and truthful comments about Dapper. He always stood up for veteran's issues (himself serving in WWII) and the needs of the little guy.

May Dapper rest in peace.